Thrill of the competition and adrenaline rush is all very good, but it won’t hurt to win. Guided by this principle, gamblers and those who were simply curious about the topic started searching for mathematical patterns of the gaming process that would make it possible to increase the chances of success.

And we cannot say that they failed.

Famous strategies built on the laws of mathematics

Let’s consider several popular strategies that are still used (despite some conflicting opinions about them).

Originally founded as a prototype for the well-known game of heads or tails, this strategy began to be used in France in the 18th century.

Today, it is successfully used when playing Roulette. However, this requires a solid bankroll and a willingness to risk large sums.

Nevertheless, despite the losses, in the end you are likely to make a profit.

The principle of this method is as follows: every time after losing, you need to double your bets until victory is won, which will actually ensure a win. It does not matter which field is selected – red or black.

For example: you bet $1 and you chose right, getting another $1. Thus, your chances of winning are 1:1. You bet the same amount and lose, reducing the balance. Then you already bet $2 and continue increasing the amount by 2 times in each round until you win, as shown in the figure.

Note: this method was originally developed for land-based casinos and therefore does not take into account the requirements of online clubs, most of which have limits on spins.

This strategy is convenient because it does not require complex mathematical calculations and works even with small amounts.

The principle is simple: double the bet with each winning move, and go back to the size of the spin made two moves earlier after losing.

Named after the famous French resort on the coast of the Bay of Biscay, this online casino gambling strategy is based on the principles of probability theory. Just like the Martingale system, it is used when playing Roulette.

All you have to do is to bet the same amount on the same Roulette field. And as many times as there are cells on a rotating reel.

You can prepare in advance by memorizing the most frequent numbers. And choose one of them to optimize your costs.

Of course, this system does not guarantee a victory, but it helps to increase your chances.

This tactics is somewhat primitive, but often effective. As a rule, it is used when playing Keno. A gambler simply chooses the same positions until he/she wins.

An alternative name of the method is “Split Martingale”, since it transforms the last one, offering the player to bet each time the amount of the first and last number of the sequence of numbers.

In case of loss, the player will return to the original bets.

This is another method for playing Roulette. It implies that when you lose, the next spin should correspond to the size of the lost money. And if you win, you need to go back to the original bet.

For greater efficiency, it is recommended to follow two rules:

It is one of Poker strategies. Its principle is to understand the opponent’s style (aggressive or loose) and to make a check at the right moment (to participate in bidding without depositing money) in order to force him/her to place the necessary bet, thus increasing the bank.

It requires a certain skill and even knowledge of psychology.

One of the variations is the so-called Slow Play, when you do not rush to raise the bet, giving the impression that you have a weak card in your hands, while you have already collected a winning combination. It also provokes your opponents, especially not very experienced ones.

In general, in Poker strategies, success depends on your calmness and skills.

As for Blackjack, it is a lot easier than most of the game categories, because it has only 2 initial parameters: cards given by dealers at the first stage. Based on their combination, you can decide what to do next: pass or take more.

There is even a summary table that determines the player’s moves with any card combination. The values of the first two chosen cards are shown horizontally and vertically, and the required action that will bring you closer to success is shown at the place of their intersection. 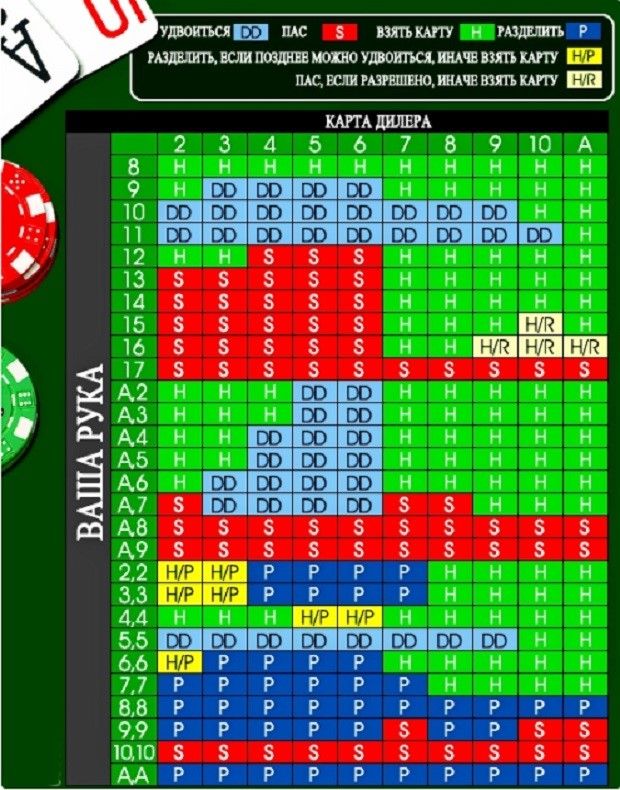 As we have already mentioned, modern online casinos closely monitor the use of strategies. And they do it not manually, but using special algorithms that reveal patterns.

Therefore, any mathematical series, whether it is a sequence of Fibonacci or Whittaker, should not be long. Of course, this makes it more difficult to follow the strategy, but at the same time you are less likely to be blocked and lose everything (as a reminder, many casinos have a provision in their Terms and Conditions that allows the administration not only to block the accounts of gamblers suspected of fraud, but also to confiscate their money).

We recommend controlling the balance of the spins in order not to draw attention of the representatives of the online club.

Plus, it is better to quit while you’re ahead to save your budget and nerves. Often, especially when playing slots, a run of bad luck occurs (and many users simply say that the machine is “wiped out”), and you can easily lose all the money won.

Of course, this review does not cover all the ways to win and hit the jackpot. However, we hope that this information will help you to be one step closer to the victory.

We can only wish you to maintain prudence and not to do anything in haste you might regret later. Have a nice game!